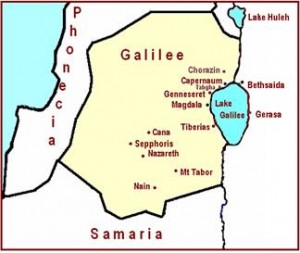 How long after Jesus’s baptism did John get arrested? Was it just as Jesus was finishing His fast? How long was John held in prison before he was killed? I have been doing some research this morning trying to answer this question and have not found a definitive answer. John was in prison during Jesus’ ministry and Luke tells John even sent some of his disciples to ask Jesus if He was the one they were waiting for. How quickly problems crowd in and wipe out certainty. God Himself had just testified to Jesus’ deity in the river Jordan.

John was also killed by Herod while Jesus was still teaching. John’s disciples brought back Jesus’ reply to John’s question. Did that settle his heart and mind before his death? Did John expect Jesus to come and rescue him from prison? John knew he was on a mission from God, so how could being in prison be part of that? John didn’t ask his disciples to ask Jesus to free him though. John probably consoled himself with knowing how all the previous prophets had been treated. He was in good company on that point. I trust that God walked with him and gave him reassurance even to the second of his death.

Now it is time for Jesus to fully take the stage. When Jesus heard John was arrested He left His childhood home of Nazareth and went to Capernaum, the place He would base His ministry. He had to fulfill each and every prophecy.  As the Author of all prophecy, He knew where to go.

As I read the prophecy quoted though I don’t see the distinction between the two locations included. Both Nazareth and Capernaum were in the region of Galilee. Was Capernaum in the Gentile section of Galilee and Nazareth in the Jewish? That would have been a HUGE distinction in those days. Exploring this on Google has netted me with more confusion that I can handle. What I did find is that Nazareth is in the middle of Lower Galilee while Capernaum is close to the top of Lower Galilee and right on the edge of the Sea of Galilee. This sea was a dividing line for territory held by Israel, especially during the time of Joshua. The Gentiles surround the other side of the lake, as near as I can tell. Again, I am NOT a bible scholar but trust God’s word completely. Jesus was frequently crossing parts of this Sea and certainly visited surrounding Gentile communities when doing so.

Ok, back to Jesus’ ministry. His first message was exactly like John’s; REPENT for the Kingdom of Heaven is at hand. Very appropriate beginning there. The Kingdom or King of Heaven was closer than they realized. He walked among them daily. If they had only REALLY understood what that meant would it have changed how they behaved? Probably not because that was not God’s plan. Did the weight of Jesus ministry feel heavier starting that day? Up until His baptism Jesus was flying below the radar for the most part. Now He was front and center for the greatest battle of all eternity!

Did Jesus the man know every struggle He would endure before it happened? We know for certain He knew the final round in the battle and how it would go down, but what about all the little battles? Because of His character He knew He would win all the skirmishes but did He know precisely what was coming? As a man did He leave that knowledge in Heaven with God?

I am FAR from all knowing. My battles sneak up on me all the time. And my character doesn’t always win out in the end. I probably lose as many battles as I win. BUT the ultimate battle for my soul wasn’t fought by me, who is SO fallible, but by Him, who is the King of ALL. Thank You God for fighting that battle for me. I certainly would have lost. Also, thank You for not showing me all my big and little battles to come. If I knew each one I would have to face long before they happened I would curl up in a ball and refuse to get up. You give me just what I need when I need it each day. No more, no less. I can trust You with my life. You have proved Yourself faithful. I’m glad I don’t have a list of prophecies to complete on my journey!