The Holy Spirit takes John into the throne room. And what an AMAZING sight that offered for us. I feel SO inadequate to do this but here we go anyway. I’m trusting His Spirit to lead the way.

The first thing I notice is that John’s location changed. When he received the vision of Jesus speaking to the churches he was still hanging out on the isle of Patmos. Everything he saw and head happened in front of his eyes. But the rest of what John was to receive was a 360 degree experience. He needed to see it ALL to fully experience the message Jesus had in store for Him.

John was not physically dead and our corrupt flesh can’t live in Heaven. So the Holy Spirit reached inside him and brought the portion of him that was already prepared for Heaven into the throne room of God. I’m sure the words he penned do not come even close the fully describing all he saw, but he put down his account anyway. I’m SURE the Holy Spirit helped out with the wording here.

I know little to nothing about stones, so John’s description of the appearance leaves me turning to Google for information (again). I wound up finding meanings for all three on “Crystal vaults” websites. I DON’T like their sites’ basic premise, so I’m not including a link to it, but I thought their meanings were worth stating.

Jasper, according to “Crystal vaults”, is supposed to be “a stone of physical strength and energy.” It is red or brownish red in color. “It is a stone of health and passion, and brings the courage to face unpleasant tasks and to rectify unjust situations.” These meanings are from man. I cannot speak to their true meanings from God. 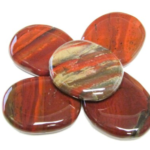 Carnelian, according to “Crystal vaults”, is “Known as a stone of motivation and endurance, leadership and courage.” Of course it’s man’s meanings and not God’s again. 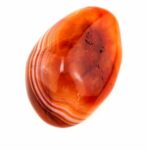 Emerald , according to “Crystal vaults”, is “A stone of inspiration and infinite patience, it embodies unity, compassion and unconditional love.” I can get behind that meaning but I don’t know if it is the one God intended.

Something I did notice when looking at jasper and carnelian was that they come from the same stone family. They are both a form of quartz and silica sand. I’m thinking John’s was looking at the red/brown variety as I can’t see Jesus being green but a bronze color. That’s just my opinion and observation, for what it’s worth. I did find a website that talks about stones of the bible so I will include that link. It really doesn’t go into the meanings but the uses and where they were mentioned in the bible.

I’m wondering about the “rainbow that had an appearance of an emerald” (verse 3b). Was the rainbow in hues of green, did it have a green cast to the regular colors, was it as solid as stone, or would it be similar to a rainbow created from refracting light through an emerald? I don’t know and I don’t know how important that point is supposed to be too.

Questions like the one I just asked and the meanings behind the stone symbols are a BIG part of why Revelation scares me. I KNOW I’m missing something when I read it. It HAS to be deeper than just the color of the stone. And I don’t have a clue how to know for CERTAIN what those meanings are. My bible helps are simply some other person’s reasoned out explanation. I don’t believe they got it directly from the mouth of God any more than I have. BUT I trust that when it is vitally important for me to understand, HE will fill in the blanks for me.

I was also thinking about the fact that with the four beasts always calling out “Holy, holy, holy is the Lord God Almighty, who was and is and is to come” (verse 8b) that the elders hardly used their thrones at all. They were worshiping God on their faces so much, why have thrones. I believe I was given the answer to this question.

There is a difference between always being on your face and choosing to leave your place of honor. The first position could be construed as “groveling.” Constantly begging and never feeling worthy enough, or heard, to rise up and take action. The second position is demonstrating an understanding of the authority and honor due to the One over you. By bowing down and worshiping, you show your understanding of where your source comes from. It is an act of gratitude and thankfulness instead of desperation.

The last thing I want to talk about, that John pays special attention to in this vision, are the four creatures. There is NO WAY I can do them justice or understand every aspect about them but this is what came to my spirit while I was reading today.

Each of the four “creatures” mentioned in John’s description are at the top of their “kingdom.” The lion is known as the king of beasts. He rules over all the wild animals. The ox is not knows as a “king” but is the most powerful and reliable animal in farming. A farmer would much rather have a strong yoke of oxen for plowing his fields than any other animal. The eagle is the most majestic bird. It never mixes with other birds in flight. It is also not a scavenger; it only eats live prey. God gave man dominion over ALL the beasts of the earth from the beginning. He also put the fear of man into the animals after the flood.

I was wondering why God didn’t use a representative from the sea as one of the creatures. Maybe it is because there is no undisputed king of the sea. He also had already represented the four directions. The only other planes not identified are above and below. He occupies the “above” category at ALL times and Satan represents what is “below” so a fifth one wouldn’t fit.

Why they have so many eyes and wings is a question I don’t have an answer for either. I have heard it said that they use one set of wings to fly, another to cover their faces and the last to cover their feet. As for the eyes, you would need that many to keep up with so much going on. “The better to see you with my dear.”

I’m going to end today’s reading with this thought. It was an AMAZING site and I won’t know the full breadth and depth of it until I see it for myself. For now, I’ll just try to imagine what John shares and let the Holy Spirit take it from there when I need to know more.

Father God, thank You for sharing this vision with me. I love how You let him go into detail about what he saw. I wish it was easier to imagine exactly what he saw, but then I wouldn’t have the surprise to look forward to. Please help me with the meanings behind what You are sharing. I feel SO under equipped to be looking into all You are sharing. Thank You for the little bits You are pointing out to me.