Samson has grown up and he wants a wife. He is adamant about the one woman he wants. “Get her for me for she is right in my eyes” (verse 3b). But her ‘eyes’ get him!

We don’t see Samson and his family again until he is marriage age. We are not given an exact age for him but in Hebrew tradition a boy became a man at the age of puberty and was considered eligible to marry after that. One source I found states that until the age of 21 both boys and girls required their parent’s permission to marry. So it could be that Samson was within that age range as he asked his father to get the woman he wanted for him. He could have also asked his father to obtain the woman of his desire for him because of the “Bride Price” needing paid. I honestly don’t know where to put him on the age spectrum.

Samson asking to marry a Philistine woman was against God’s instructions to Israel. He had told them not to give their daughters in marriage or take the daughters for their sons from the nations around them. They were to be separate and holy people. So Samson’s parents had every right to try and persuade him to look among his people.

But we are told here that Samson’s desire for this woman was of God. Samson’s determination won out and he was able to follow the leading of his heart, which was being directed by the Spirit.

I’m curious here. Was Samson a willful child? Did his parents give in to him on a regular basis? I’m imagining that his parents would have had to be firm with him as a child to help him keep the Nazirite lifestyle he was called to. Maybe Samson was old enough that he had the right to choose his own wife and his asking his father’s permission was just a formality.

Let’s move onto the trip down to Timnah to ask for the woman’s hand in marriage. Samson and his parents made this trip together but somehow he got separated from them. He was far enough away from them that they didn’t hear the lion roaring. If they had they probably would have been searching for their son in fear. They also didn’t notice the blood on him from his ripping the lion to pieces. Was he able to clean up before meeting back up with them? Did he disguise the blood on himself? Was their eyesight failing? His state also wasn’t noted when he “talked with the woman” (verse 7b). No one but Samson knew of this event. Maybe he was like Billy from the Family Circus comic strip in that he never took a direct route anywhere but wound his way ALL OVER THE PLACE when going from Point A to Point B. 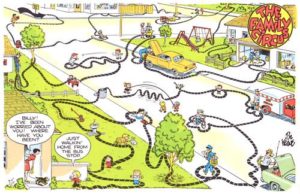 Samson’s engagement was EXTREMELY short! Usually the betrothal period for marriage lasted long enough for the bridegroom to build a home for the couple. According to Jewishencyclopedia.com the betrothal period was twelve months unless one of the members of the couple was widowed; then it was one month. Samson’s marriage had to happen in a short enough timespan that the carcass of the lion was still distinguishable.

I was wondering if bees were carnivorous and if it was normal for them to build hives around meat. I learned that bees are not but wasps are. Most wasps don’t make honey but there are a few species that do. Is it possible that the wasps that make honey were feeding on the insects living in the carcass of the lion? It sounds reasonable to me. It must have been a pretty big hive for there to be enough honey to share with three people. They probably didn’t have enough to make a meal out of it but there was enough that Samson shared it with his parents. I’m thinking he came back by the lion by the “Billy” process again. His parents were probably used to him wandering off.

Samson is in high spirits at the time of his wedding, as would be expected, but his good spirits look a bit different than normal. He isn’t able to drink the wine being offered to the guests. So he comes up with a challenge for the guests of his bride. He gives an ‘inside riddle’ that no one but him would be able to answer. He stacked the deck and planned to take advantage of them. If it weren’t for the wager placed on their answer I would have said he was having a bit of fun with them but the wager made it serious.

When the guests can’t figure out the riddle, Samson learns a new lesson. A lesson of tears. His bride’s tears are his Kryptonite. His bride emotionally pressures him daily until he finally gives in. She starts with the ‘famous’ “You don’t love me!” and goes on from there. By the end of the week Samson’s mental strength is gone and he gives in. She immediately betrays him by giving the answer to her guests and Samson loses his wager.

Instead of taking his anger out on his bride or her guests, he goes into another Philistine town and kills 30 unsuspecting men. He takes their clothes to pay his debt and storms off home. I don’t know who these men were or if they were somehow deserving of their fate but in this instance they were innocent. They weren’t a party to this problem at all. They were merely a convenient solution for Samson. But they were also a toe hold into the Philistine’s dominance of Israel.

God told Samson’s parents that he would “begin to save Israel from the hand of the Philistines” (chapter 13, verse 5b). Samson’s interactions with the Philistines will be the building block that the people of Israel will be able to point to and see God’s deliverance in action. His story is not a nation rising up against another but one man, in the Spirit of God, taking back from those who wronged him. One heart at a time, one hurt at a time, one battle at a time, ALL surrendered to One God, and Israel will be freed.

When I was first reading this story I was under the impression that the only reason Samson’s bride pressed him for an answer was because of the threat to her family but reading it again I see she started her campaign of tears from day one. “She wept before him the seven days that their feast lasted” (verse 17a). The guests didn’t ask her for the answer to the riddle until the fourth day. It took her turning up the heat on the remaining days and especially on the last day. She was originally motivated to get the answer but the added incentive put her pleas over the top. I wonder if she was pressing for the answer to the riddle before she was even asked to.

Samson’s bride saw that her tears and words were working on Samson when he responded with his first refusal. “Behold, I have not told my father nor my mother, and shall I tell you?” (verse 16b). Armor’s first crack! This crack encouraged her to press harder until he finally fell at her feet.

Satan knows our weaknesses. He is dedicated enough to probe until he finds them too. He studies us and learns how to exploit them. His weapons are not all physical either. A LOT of them are mental and emotional. It is our job to recognize these cracks and ask for help from our Father to shore them up. There are going to be times when our armor falls off but during those battles we can still learn some valuable lessons. We need to apply those lessons in our next battles.

We will see that Samson doesn’t wise up to Satan’s tricks and falls prey to the same weapons later on. He paid a heavy price for his refusal to address his issues. This is NOT a price I want to pay!

Father God, thank You for all the lessons along the way. Thank You for my strong points and thank You for helping me identify and address my weak points. I KNOW I haven’t completely shorn up my weak spots. I’m working on them still. I’m praying I don’t find myself overwhelmed again and lying broken on the floor. Help me stand against the enemy’s darts! Reinforce the spots in my heart that have been assaulted for so long that they easily weaken. Teach me how to block and defuse Satan’s attacks; especially the ones he has been so successful with in the past.

You gave me one tool earlier today. Help me employ it. I see great success in this weapon. Help me remember to dance when the pressures begin to build. “Have you danced today?” Thanks Holy Spirit!

This site uses Akismet to reduce spam. Learn how your comment data is processed.