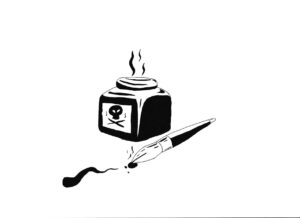 The neighbors are NOT happy to see the progress of the Temple project. Their direct efforts are not working so they send a poison pen letter to the king.

The people that have resettled the land of Israel are scared. They are afraid of what a reestablished Jewish community could mean for them. Will they try and take all the land back, including Samaria? Will they become a nation of power again? And probably of greatest concern, if they build the Temple for their God will He once again fight for her?

So far the efforts of subterfuge have only slowed down the progress on the new Temple. The people keep plodding along no matter what the obstacles. This has got to STOP, NOW. It’s time to take it up a notch and involve the highest authority in the land; the king of Persia. But they can’t tell him their real reason for wanting the rebuilding stopped is so they will feel safe. They have to appeal to what is important to him; his pocket book and his ego.

At this point in time, Judah poses no threat to the king of Persia. This band of liberated Jews have nothing more on their minds than rebuilding their relationship with God by proving themselves faithful in rebuilding His house. They don’t have political ambitions lurking beneath the surface. They mean to honor the Lord as He honored and saved them. He remembered them in their captivity and he brought them home. Surely He is worthy of praise and obedience.

I wonder what the attitude of the people really is. Are they content to just finish the Temple and the city with its walls of protection? Do they long for the days when Israel and Judah were on top? Are they worried about their ‘neighbors’? Do they expect trouble? Are they concerned with all the little things the ‘neighbors’ have done to mess with their progress? Or do they just keep working, one day at a time, no matter what comes? Have they thought ahead to what might be after the rebuilding is complete? Do they have plans of sedition when all is in order? We know that their BIGGES plan is to serve their God as He commands.

With a pen dripping with honey and ‘concern’ for their king, the neighbors take their case to the next level. If this doesn’t stop them nothing will! They paint Judah in as hostile a light as possible. “The people are elitist and bend on domination. They are rebellious and will not bow down to other kings. If you give them an inch they will take a mile. You need to nip this in the bud before they become truly dangerous to our, I mean your, way of life. Above all else, they will stop paying your taxes and honoring you if you let them get established.”

That’s hitting the king where he lives; his pocketbook and his reach. No king wants to lose territory under his rule. They seek to gain it instead. If not through peaceful means then through war. Cyrus was the one who released these people but it wasn’t for their complete freedom. It was so that they could build a House for their God and become even better citizens of Persia. I doubt he even considered the long term plan for Judah. I suppose that God kept his mind from going there. When Pharaoh’s did in the days following Joseph’s death it resulted in the enslavement and exploitation of Israel.

The king carefully considers the issues raised by the neighbors. He makes a thorough search of the literature available to him and sees how Judah stood her ground against all but the strongest opposition. This is disturbing to the king because he really doesn’t know what is in the hearts of the people. To protect himself and his kingdom he decides to… Oh wait, that’s tomorrow’s story!

I know how it feels for someone to spread malicious rumors about you. The best rumors involve a kernel of truth. And appeals to the person who hears its biases. Those are the ones that can take on a life of their own and draw in even the most careful listener.

Father God, please prevent me from being the spreader of rumors or the recipient of them. Protect my heart from going to the places that generate rumors. And help me live a life that doesn’t generate rumors in the minds of others. NOT one that compromises to whatever is popular but one that is above reproach.

This site uses Akismet to reduce spam. Learn how your comment data is processed.