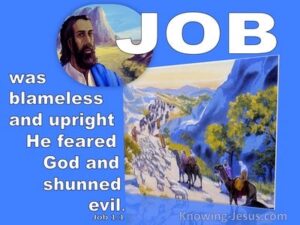 We have come to the story of a righteous man who will encounter some serious issues. Today we will meet Job.

Job was a family man. He watched over his family with GREAT care. He had seven sons and three daughters. He was always on the lookout for trouble with them. He raised them all to love and obey the Lord but he was afraid they might have “sinned, and cursed God in their hearts” (verse 5c).

Job was also very well of financially. In the list of his assets they don’t seem extreme considering some of the numbers we have come across before, but he is an ordinary man and not a king. For a normal citizen, he “was the greatest of all the people of the east” (verse 3b).

What is MOST important about Job though is his relationship to God. He is not of the people of Israel yet he “was blameless and upright, one who feared God and turned away from evil” (verse 1b). We are not given a timeline for when Job lived so we don’t know if he was a contemporary of Abraham. My Bible Helps puts him around the time of Abraham, Isaac and Jacob. That’s a pretty big time space. “Before the exodus” is how they put it. Whenever he lived he had heard about the One True God. And he lived his life serving Him.

My Bible Helps also tells me that Job’s story is mentioned by Ezekiel and James. Somehow the Israelites heard of his story. They heard of the man who served God with his whole heart. The fact that he endured and continued to love God, in spite of all that happened to him lived on in the annals of time and provided an example for many, even today. His story lives on as one who loved God and refused to let circumstances turn him against Him. But I’m getting ahead of myself.

I do have another observation I want to make about today’s reading. I want to note how close knit his family was. His children were all grown but they continued to meet together regularly. “His sons used to go and hold a feast in the house of each one on his day, and they would send and invite their three sisters to eat and drink with them” (verse 4). I don’t know if the phrase “on his day” means birthday or just any day the sons chose. It could have been that they rotated among the houses with regular celebrations. The thing I wanted to point out is that they always included ALL their siblings. The sisters didn’t have homes of THEIR own but their brothers never left them out. They weren’t invited to serve them but to partake in the feast too. This was not a typical occurrence, even in bible days. Men and women were supposed to eat separately but this family appears to have refused to bow to custom. I wish my children were as close knit as Job’s were.

The only negative thing in all of our reading today is Job’s fear. He was always afraid his children were going to slip up and sin. And he feared they wouldn’t turn to God on their own to resolve the situation. After EVERY feast “he would rise early in the morning and offer burnt offerings according to the number of them all” (verse 5b). Here, he lived in fear. After all the years he spent raising his children, he didn’t trust them to come to God on their own and ask for His forgiveness.

I would love to have a family like his. One that is close to one another and chooses to spend time with one another. My children all love one another but they don’t spend time together very often. They also don’t think to call on one another in times of need. They call me and I link them up when their needs coincides with their sibling’s skills or experience. I don’t mind linking them because it gives me time to talk with them all. Sometimes I even lose track of what is going on in their lives. I do bring them all together every summer for Camp NaPa.

I would also love to have it said about me what was said about Job; the part about being blameless and upright. I KNOW I don’t fit that description on an ongoing basis. I make my share of mistakes. Because Job is human, I know that he sinned at some time in his life. But his overall conduct was above reproach.

Father God, work on my heart so that someday You can say the same thing about me. I already share his ‘fear’ for his children. I know mine are not walking how they should be. I also know that they are STILL within Your grasp. I give them to you once again.